I am beginning to think the Surf Countdown is similar to March Madness in that you never know what is going to happen on any given week. The February 16th Surf Countdown had a lot of shake ups and resulted in a new #1 song. Sylvia Johns Ritchie’s “Carolina Moon” jumped a total of 12 spots to unseat Jim Quick and Coastline’s “Cleaning Windows” which had been at the top of the chart for 3 straight weeks. “Carolina Moon” made its debut on the Jan 12th Surf Countdown in the #9 position, dropped 11 spots to #20 on Jan 19th, dropped 2 spots to #22 on Jan 26th, jumped 15 spots to #7 on Feb 2nd, fell 6 spots to #13 on Feb 9th and landed in the #1 position this week. As you can see, the song was up and down for 5 weeks before making it to the top of the chart. I will once again stress the importance of weekly voting as this song proves what happens when you get your fans, friends and family to support you on the Surf Countdown.

“San Miguel” by Delbert McClinton made its return after a 4 week absence, as did “Do You Know What I Mean” by The Holiday Band after a 1 week absence. The Feature Attraction Band remained in the #22 position for the 2nd week with their song “This One’s For The People” and Scotty McCreery held on to the #5 position for the 2nd week in a row with his 2018 CBMA National Dance Song “Barefootin”.

A total of 10 songs moved up from last week. The largest leap was “Carolina Moon” with a total of 12 spots. 11 songs dropped positions from last week with 7 dropping 2 or more spots.

Thank You For Your Support of the Surf Countdown 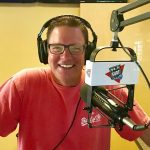 I truly appreciate all of you that participate each week in the Surf Countdown. This is your countdown and a great way for your voice to be heard on what you believe the tops songs in Beach Music are each week. I would also encourage to share the countdown web page with your friends and family and get them in on the excitement.

Have a great week and we’ll do it all again this Saturday at 10:00 am!